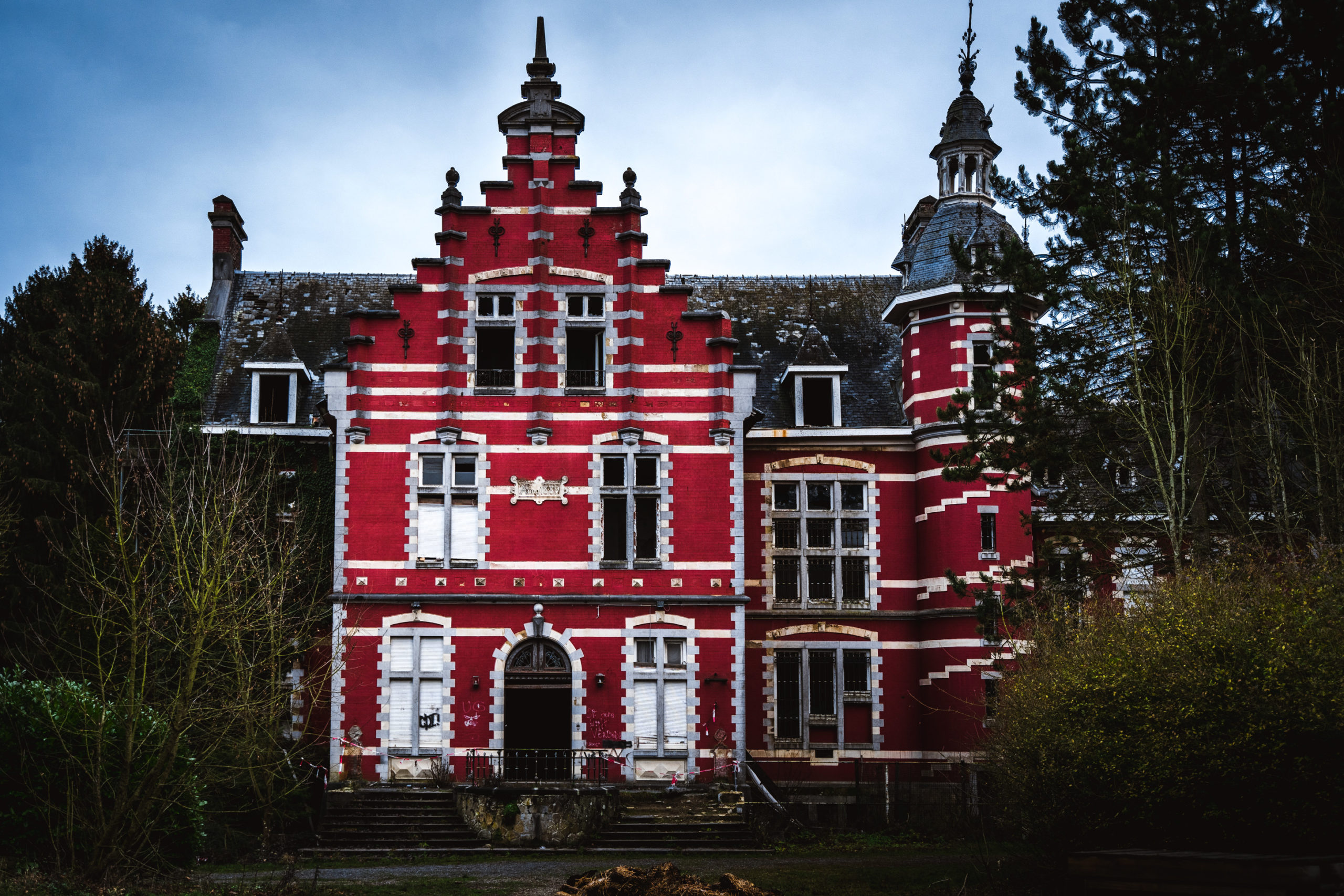 Isolated and located on the edge of the forest, the Château Rouge is a popular spot for urban explorers. It is so well known that it has several nicknames, leaving each passing visitor the embarrassment to choose the one he or she prefers: Château Bambi, Château Danny Rolling, Château Les Chambres or Hôtel Torrance are just a few examples, beyond the classic “Château Rouge”. Personally, I prefer this last nickname because it is above all the color of the facade, a dazzling red, that strikes us in the eyes and makes this building unique to photograph. Though, I hesitated for a long time to go there, knowing that the place was very visited, suspecting that there would not be much left to see inside. Fortunately, I got there just in time, as the entrances have since been walled off, not too long ago (around August 2020).

On the spot, reality confirms my fears. The interior of the building is devastated, it is even dangerous in some parts, on the upper floors. However, one cannot help but admire the structure of the main entrance with the grand staircase. Originally this chateau had 12 bedrooms, 5 bathrooms and 2,400 square meters of living space. Built in a Renaissance style in 1889, it is apparently a replacement for another castle, which would have caught fire in the mid-1800s. It has apparently served several functions, although these are not from reliable sources: conference space, rest home, children's home, luxury hotel ... The multiplication of functions is explained by the fact that the property has passed into the hands of several owners. The latter could not continue to maintain the premises.

The Château Rouge has been abandoned since 2006. Airsoft players have since made it their playground. I just ran into one of them on my way to the castle. I kindly asked him if he didn't mind if I took some pictures on the site. He told me there was no problem as long as it wasn’t there to degrade the place. Because yes, there has been some degradation in the course of the last years. The accesses have recently been walled up, a sign that things are moving. A possible renovation? The future will tell ... I took the opportunity to take my pictures calmly, as night was already gradually falling. I find that the dark side brought a more dramatic side to the photos, of which I also accentuated the contrast and brought out the colors, to mark the reds and blues. It was a good idea going there.